10 Facts You May Not Have Known About Motley Crue’s ‘Dr. Feelgood’

It isn’t common for a band’s fifth album to be their best work of art, but that was the case for Motley Crue. By the end of the ’80s, the Crue had already been living like rockstars for nearly eight years and toured the world. But, they hadn’t given us their best just yet.

The bad boys from Los Angeles had their fair share of both success and tragedy between their first release, 1981’s Too Fast for Love, and 1989’s Dr. Feelgood. Vince Neil got into a fatal car accident that cost Hanoi Rocks drummer, Razzle, his life. 1985’s Theatre of Pain was criticized harshly by the press, and Nikki Sixx died, but was eventually revived, in 1987.

Dr. Feelgood came out Sept. 1, 1989 and is viewed by most as the band’s strongest album to date. While the self-titled track and “Kickstart My Heart” revolved around the band’s struggles with addiction and Sixx’s death scare, anthemic tracks like “Rattlesnake Shake,” “Same Ol’ Situation (S.O.S.)” and “Don’t Go Away Mad (Just Go Away)” became instant fan-favorites as well.

It’s been a long 31 years since the iconic album came out and closed the decade with a bang. The band had a brief period with John Corabi on vocals and Tommy Lee exited for a period as well. But they eventually got the core four back together, embarked on a final world tour after signing a cessation-of-touring agreement in 2015 and released the biopic The Dirt earlier this year. They may not be an active touring band any longer, but the legacy of Dr. Feelgood will never fade.

Here are 10 facts you may not have known about the album.

1. It was their first album recorded sober.

Between the aftermath of Neil’s crash and Sixx’s death scare, reality finally started to set in for Motley Crue — if they didn’t get their shit together, their career would be over, and they could end up dying (permanently). So, the band cleaned up before getting into the studio and really channeled their energy into the music, which can obviously be heard.

The nickname “Dr. Feelgood” was originally give to Dr. Max Jacobson by the Secret Service during John F. Kennedy’s presidency. Jacobson was known for administering amphetamine to prominent clients like the Kennedy’s, Marilyn Monroe, Elvis Presley and more, via injection.

He eventually lost his license…thank heavens.

4. It references their past.

In the song “Don’t Go Away Mad (Just Go Away),” there is a line that says “I knew it all along / I’d have to write this song / Too young to fall in love / Guess we knew it all along,” which is a reference to their early hit “Too Young to Fall in Love.”

5. The title-track was originally much different.

Sixx, who wrote pretty much all of Motley Crue’s music, had an entirely other set of lyrics for the song “Dr. Feelgood.” He told Rolling Stone around the album’s 20th anniversary, “It had a whole different theme to it. It was called ‘Dr. Feelgood,’ but a whole different thing lyrically. In the end it was inspired by drug dealers.”

In 2008, Nike released a commemorative “Dunk High” sneaker that was colored to match the theme of the album cover — different shades of green, snake print and red. 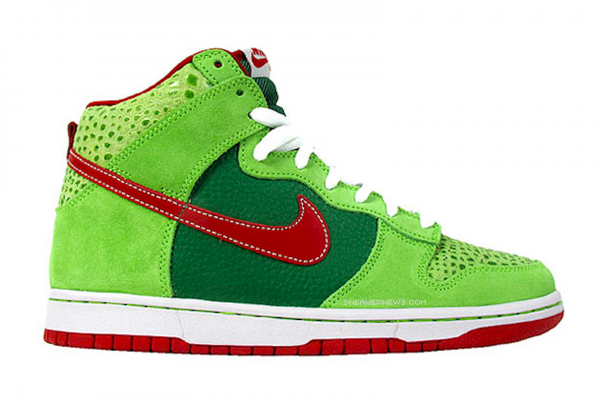 7. It has all-star guest appearances.

It peaked at No. 1 on the Billboard 200, and spent a total of 109 weeks on the chart. It also won Best Hard Rock/Heavy Metal album of the year at the 1991 American Music Awards.

Neil played guitar on some songs on the album, including “Don’t Go Away Mad (Just Go Away)” and “Same Ol’ Situation (S.O.S.),” and played live too.