Alex Smith 60 Minutes Interview: “This year has only emboldened for me that I can play at this level” 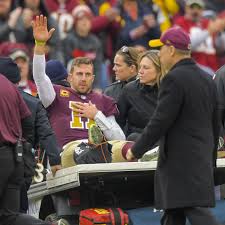 Alex Smith and his wife Elizabeth were interviewed by 60 Minutes last night, and gave some insight into his injury, his recovery, the comeback, his setback this year, and possibly a hint at his future plans. Smith’s injury on November 18, 2018 has been well-documented. He suffered a spiral fracture to his tibia and fibula, and was rushed from the field to the operating room. His wound got infected and he almost lost his leg, and possibly his life, while undergoing 17 surgeries.
His comeback has been one of the biggest stories in Washington and the NFL this season. Almost no one thought he would ever play football again, but he was cleared to play and made the Washington Football Team’s roster at final cutdowns. He started the season as the #3 QB, but was elevated to the backup QB after starter Dwayne Haskins Jr. was benched. His first game active in almost two years saw him enter the game to replace Kyle Allen who suffered a head injury. He went on to replace Allen after he suffered a serious ankle injury 3 games later. Smith finished the year with a 5-1 record as a starter, and he started in the season finale victory over the Philadelphia Eagles that secured Washington’s first division championship since 2015.
The end of Alex Smith’s comeback season saw him missing 3 1⁄2 of the final 5 games and being unable to play in Washington’s home playoff game vs the Tampa Bay Buccaneers. Smith’s injury was listed as a calf strain, but Ron Rivera later mentioned a bone bruise that was keeping him out.
Smith doesn’t say whether he will try to play another season, but he definitely didn’t close the door when he said “This year has only emboldened for me that I can play at this level.” His wife, who some thought would talk him out of playing another year, also didn’t seem to shoot down the idea, despite her reservations when he first came back.

Alex Smith is still under contract with the Washington Football Team for two more seasons, but there is no guaranteed money left on his deal. If he decides to try to play for another year, Washington has a big decision to make about the position. Smith currently has the biggest cap hit for the team next year, and would bring $14.7 million in cap relief if he is off the roster. Ron Rivera, the coaches, and the players love Smith, but is he a realistic option anyone can rely on next season? If Rivera doesn’t think so, and Smith wants to play, that will force a tough decision personally and professionally for the coach.

Alex Smith: It was one of those plays as a quarterback, you know, “Okay, they got us—” you know, “Secure the football and— and just kinda get down.
Norah O’Donnell: You could see it or you felt it?

Alex Smith: The visual was the most alarming thing, for me to look down and know that my leg was broken, it wasn’t straight— bending in a place it shouldn’t bend.

Dr. Robin West: Alex isn’t a guy who goes down a lot. I had never run on the field for him.
Dr. Robin West: And I realized quickly that the injury was— was severe when I got out there.
Norah O’Donnell: Just so that people understand, what is a compound spiral fracture?
Dr. Robin West: He had a fracture that extended from his ankle joint up to his knee joint. So, it spiraled all the way up the tibia, and then he had a piece of bone sticking out of his skin.
Norah O’Donnell: How often do injuries like this happen in football?
Dr. Robin West: Like this? No. Very, very rarely.
Norah O’Donnell: Do you remember what he said to you in the ambulance?
Elizabeth Smith: Yes. He wanted me to pull the game up on my phone. He wanted to know the score, he wanted to know how the offense was doing. He was not even worried about his leg whatsoever. He was worried about his team.
A team of orthopedic trauma surgeons was waiting to operate at Inova Fairfax Hospital in Virginia. They put Smith’s leg back together with three plates and 28 screws and pins.
After surgery the X-rays looked good, but what Dr. West and her colleagues could not see was bacteria, she thinks from Washington’s football field, had infected the open wound on Smith’s leg.
Alex Smith: There in those couple days after is when it— it, you know, quickly— quickly got sideways.
Elizabeth Smith: His blood pressure’s dropping, his fever was skyrocketing. And that’s when I knew it was a lot worse than we ever anticipated.
Not many diagnoses sound worse than necrotizing fasciitis, more commonly known as flesh-eating bacteria. As the infection ravaged Smith’s leg, his body reacted by developing stage-two sepsis, a dangerous condition that can damage organs and lead to death.
Norah O’Donnell: And his infection just keeps getting worse. What’s going through your mind?
Elizabeth Smith: I’m obviously more worried about his life. He is septic. And, you know, you hear all these staggering numbers on when people go septic.
At one point, Elizabeth Smith asked to speak to Dr. West privately. His medical team was already considering the amputation of her husband’s right leg.
Dr. Robin West: She said just— just to get rid of it. “I just want him to live and walk out of here.” So, we talked to his family and his father had a similar view. And then we went to Alex. But he said, “Do what you can to save my leg. Do anything you can to save it.”
Smith underwent eight operations in ten days to carefully remove all the dead or infected tissue.
Norah O’Donnell: What did Alex Smith’s leg look like?
Dr. Robin West: Bone, basically. All he had was his calf muscle and his tibia and his fibula.
Alex Smith: We were in the hospital approximately a month. They had to remove quite a bit of muscle and tissue from my lower leg— in order to— to get the infection under control.
Alex Smith: And then faced with the reality that, “Hey, we—” you know, “We— we still might have to cut off your leg.” And— for me, that— to hear those words— hard to deal with as a professional athlete, and someone that— that really— I— I mean, I think I took that for granted for so long- my body, my health. Yeah.
Norah O’Donnell: The most basic thing people take for granted.
Alex Smith: Yeah. No doubt. Just wondering, like, I mean, would I ever be able to go on walks with my wife? Would I ever be able to play with my kids? Crazy reality. So yeah really thankful to be here.
Surgeons covered Smith’s bones so they would heal, partly by removing a portion of his left thigh muscle and placing it on his lower right leg.
His leg was also fitted with a piece of hardware called an external fixator.
Alex Smith: It looks medieval, but it’s really advanced orthopedics. And so I wear this metal cage that’s bolted into and pinned into my leg, and it holds my leg and bone in place— while it heals.
Norah O’Donnell: How long did you have to wear the fixator?
Alex Smith: Yeah, it was almost ten months I wore this bolted in my leg. It was a long process.
The Center for the Intrepid in San Antonio was specifically built to help Wounded Warriors through that process. Dr. West reached out to her friend Johnny Owens, who for ten years had been the center’s chief physical therapist.
Norah O’Donnell: Had you seen a lot of injuries that were similar to what Alex had?
Johnny Owens: I have. That was the hallmark injury of— of the wars was these lower leg injuries from blast traumas, stepping on landmines.
Smith requested and received special permission from the Pentagon to visit and consult with the Center for the Intrepid’s staff.
Johnny Owens: We saw hundreds of Alex Smiths come through this door with those type of injuries and— and said, you’re gonna be able to run. You’re gonna be able to do all these type of things that— that people told you you weren’t gonna be able to do.
Dr. Joe Alderete: From the moment we— we met, you could tell in the look behind his eyes that can be so many of my patients, either blast inju

“It’s bigger than football… It’s not about the game. It’s about… getting back on your feet and dusting yourself off, no matter what the obstacle is,” says Alex Smith’s wife about the QB playing again after almost losing his life and his leg. https://t.co/zwef2EsILA pic.twitter.com/xQE279Aw9J