At least 3 men from Oregon protest appear to have joined insurrection at U.S. Capitol

Many people who tried to storm the Oregon Capitol building on Dec. 21 did not face criminal charges. Two weeks later, some of them would support similar actions in Washington, D.C.
Three men who participated in efforts to storm the Oregon Capitol building Dec. 21 also appear to have traveled to Washington D.C to take part in last week’s failed insurrection at the U.S. Capitol.
Images captured on social media and national television show what appear to be two of the men inside the U.S. Capitol as part of the mob attack that left five people dead and temporarily stopped Congress from certifying electoral college votes for President-elect Joe Biden. The third man was part of the mob but evidence has not shown he entered the building.
A review of video and photos from both events by OPB shows men whose appearance matches David Anthony Medina, 31, of Sherwood; Tim Davis, 59, of Springfield; and a third man who OPB has not been able to identify by name but appears to be the same person. None of the men have faced criminal charges for participating in either rally.
Over the past year, political extremists have escalated their tactics without significant intervention from law enforcement. Last week’s attempt to subvert democracy was merely the latest in a string of increasingly brazen and dangerous assaults on government institutions, including the December violence in Salem, an attempt by protesters to break into the Washington state governor’s mansion last week and the armed takeover of the Michigan State Capitol by far-right groups last spring.
Often, the same players show up at multiple events to engage in political violence.
Oregon U.S. Attorney Billy Williams vowed this week to prosecute any Oregonians who traveled to Washington D.C. and committed crimes.
“I join my fellow U.S. Attorneys in unequivocally stating that if we learn of any Oregonians who traveled to participate in this violence, they will be prosecuted in the District of Oregon to the fullest extent of the law,” Williams tweeted.
So far, three Oregonians have faced charges for curfew violations in the District of Columbia related to the insurrection. Prior to OPB’s analysis, no one from Oregon had been known to have entered the U.S. Capitol building with the mob, however.
The FBI is investigating the Washington D.C. attack in an attempt to charge people who instigated the violence. The Washington Post reported agents are also investigating whether some in the mob intended to kill lawmakers and staffers or take hostages. Several images show people in the mob carrying zip-tie handcuffs, including one image from inside the Senate chamber. The New Yorker reported another man on the floor of the Senate was a former officer in the Air Force.
A spokeswoman for the FBI’s Portland field office wouldn’t confirm whether the men OPB identified were known to them or part of an investigation.
“We will continue to aggressively investigate each and every individual who chooses to ignore the law and instead threatens violence, destruction of property, and injury to others,” the FBI’s Beth Anne Steele said in a statement.
Medina, the man from Sherwood, Oregon, is the organizer of the group Oregonians for Trump and the former campaign manager for Anna Kasachev, a failed Republican challenger for House District 22, which represents Woodburn. 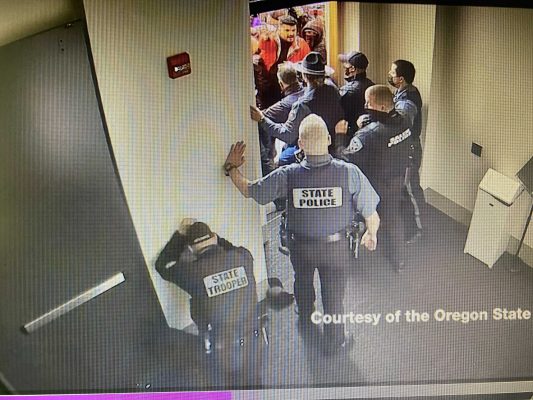 A man who looks like Medina was broadcast on ITV News during the siege inside the U.S. Capitol. The man stood outside House Speaker Nancy Pelosi’s office as protestors looted it; one rioter carried away the speaker’s nameplate. Next to the man who appears to be Medina is another man wearing a sweatshirt that says “Camp Auschwitz.”
“We were good people, the government did this to us, we were normal, good law abiding citizen, and you guys did this to us,” the man who appeared to be Medina told ITV News.
On Dec. 21, images and video show Medina in Salem, Oregon, at a similarly raucous protest.
The rally, which took place two weeks before the insurrection in Washington, D.C., saw pro-Trump demonstrators push back police and break into the Oregon Capitol while lawmakers met in special session to pass relief efforts for businesses and schools affected by the COVID-19 pandemic. The statehouse was closed to the public because of COVID-19, but a surveillance video released this week shows a Republican state representative opened a side door to the building that allowed the men to gain entry.
At one point, Medina is videotaped shouting into a bullhorn as Trump supporters gathered outside the locked statehouse. At another point, Medina stood at the front of a group of protesters inside the building and pointed at a line of Oregon State Police troopers blocking the crowds’ entry into legislative chambers.
“Don’t be mad at us,” Medina shouted at the officers. “We’re not here to cause trouble. We’re here to take our freedoms back.”
Medina, in a red coat, is also shown on surveillance video trying to push past Oregon State Police as the pro-Trump crowd gained entry to the building. The video shows him next to Joey Gibson, founder of Patriot Prayer, a far-right group whose members have repeatedly engaged in violence during protests. Both men entered the statehouse. Neither were among the five people who have so far been arrested in connection with the Dec. 21 violence.

“We had a state rep open that door for us,” Gibson said in a video addressed to his followers on the conservative social media site Parler, a likely reference to Rep. Mike Nearman, R-Independence, who opened a door to the building for the conservative demonstrators.

Medina did not return calls, emails or text messages. Since the attack on the U.S. Capitol, Medina has deleted several of his social media accounts. In a video posted online, Medina acknowledges he was in the Capitol building.
“Did it go too far? Yes. There was like a few who took it too far,” Medina said in the video.

The FBI is seeking to identify individuals instigating violence in Washington, D.C. We are accepting tips and digital media depicting rioting or violence in and around the U.S. Capitol on January 6. If you have information, visit https://t.co/buMd8vYXzH.

Davis, the man from Springfield, Oregon, is the founder of a group called The American Patriotic Society and has attended numerous far-right rallies, including an Aug. 22 Trump rally outside the Multnomah County Justice Center in Portland that eventually devolved into an hourslong street brawl.
Images from Washington, D.C., show Davis on the steps of the U.S. Capitol as protesters clashed with police officers. Davis confirmed to OPB that he was in Washington, D.C.
“When I got up there, there was no police line,” he said. “I wasn’t aware they had stormed the Capitol.”
Davis said he did not enter the building. Video shows him intervening between a protester and a police officer as the protester threw punches Wednesday.

Guy in “fuck antifa” hoodie swung at cops a few times and they were just like ‘well okay i guess’ pic.twitter.com/uAvvucIarG

Davis, the man from Springfield, Oregon, is the founder of a group called The American Patriotic Society and has attended numerous far-right rallies, including an Aug. 22 Trump rally outside the Multnomah County Justice Center in Portland that eventually devolved into an hourslong street brawl.
Images from Washington, D.C., show Davis on the steps of the U.S. Capitol as protesters clashed with police officers. Davis confirmed to OPB that he was in Washington, D.C.
“When I got up there, there was no police line,” he said. “I wasn’t aware they had stormed the Capitol.”
Davis said he did not enter the building. Video shows him intervening between a protester and a police officer as the protester threw punches Wednesday.
“Shortly after that, they started throwing gas bombs,” Davis said. “By the time I got it out of my eyes, I didn’t have any idea they broke into the Capitol.
Davis said he was “shocked” at Wednesday’s events, and that he traveled to the nation’s capital to support President Trump’s false claim that the election was stolen.
“When the president calls you, you feel it’s your constitutional duty to go,” Davis said.
House Democrats have said they will introduce an article of impeachment against President Trump on Monday for inciting the insurrection and undermining democracy. In a speech to his supporters before the mob stormed the Capitol, Trump told the group to walk to the building “because you will never take back our country with weakness.”
Some Republican politicians in the Northwest have tried to walk a similar line as the president, encouraging Trump supporters to direct anger at lawmakers, while still claiming they do not support violence.
That dynamic was on display at the Dec. 21 event that turned violent in Oregon. In a video posted online that day, Medina and Davis argue with each other outside the Oregon State House in Salem. They debate whether state Sen. Dallas Heard, R-Roseburg, can be trusted to support the crowd. Heard has spoken at pro-Trump rallies this year, telling crowds they are rightfully angry over the results of the 2020 election. While encouraging the crowd to use their votes to remove Democratic lawmakers, Heard also called the presence of Oregon State Police at the rally an “act of treason.”
It proved to be a fine line that did not stop some members of the crowd from breaking into the building that day and tangling with law enforcement.
“They’re criminals!” Davis said to Medina, referring to legislators inside the building. “Do you believe or not that these people are criminals?”
“Absolutely,” Medina replied. “Absolutely.”
Medina then pointed to Heard and said: “He does too.”
”No, he doesn’t,” Davis replied. “He doesn’t.”
Davis was among the group that broke into the Oregon statehouse and tried to confront lawmakers before being removed by police. He was not arrested.
A third man whose identity OPB was not able to confirm also appears to have attended both events. The man, who wore a blue camouflage “Make America Great Again’’ hat at both events and has tattoos on his right forearm, pushed and threatened a photojournalist with the Statesman Journal on Dec. 21. He has not faced charges for his actions at that event, though Oregon State Police confirmed Saturday they are still investigating possible crimes at that rally.
Photos taken in Washington, D.C., this week show what appears to be the same man inside the U.S. Capitol rotunda, standing on a statue of former President Gerald Ford. Protesters placed a MAGA hat and a Trump flag on the bronze statue. In a widely circulated photo from the insurrection, the man who appears to be from the Oregon rally has his mouth open in a shout as he puts his arm around Ford.
The FBI has included the photo of the man on one of its “seeking more information” posters about the attempted insurrection. The acting U.S. attorney for the District of Columbia told NPR on Sunday that “hundreds” of people could ultimately face charges for the insurrection.