The 41 Most Memorable Red Carpet Looks From the Past Decade

Look at red carpet pictures from any given year, and you can be transported back in time, remembering the biggest names, the major trends, and, sometimes, even the biggest issues that were weighing on people’s minds. The last decade changed how we consumed and talked about Hollywood fashion—social media played a bigger role (Twitter was founded in 2006, Instagram in 2010, after all), stylists became celebrities in their own right, and the veil was lifted slightly on what actually goes into dressing someone for a high-profile event. We asked different questions: of actors, but also of the fashion industry, of who has access to the glitz and glamour and gowns. And we got plenty of memorable looks we still think about and reference today.

There are a few red-carpet moments that we can all agree on. (Several people interviewed for this story called out Billy Porter’s Christian Siriano tuxedo-gown hybrid from the most recent Oscars as a standout from the decade.) But looking back on the last ten years of red carpet fashion, there have been countless fashion moments that have landed in the headlines for a wide variety of reasons: because it was beautiful, because it showed someone in a brand-new light, because it sent a message, because it opened up a conversation.

“An ‘iconic’ red carpet moment can be interpreted in so many ways,” says stylist Andrew Gelwicks, who works with actors like Catherine O’Hara and Dominique Jackson. “On one side, you have Britney Spears and Justin Timberlake’s matching denim looks from to the 2001 American Music Awards—they were kitschy and costume-y. Then, on the other, you have Lady Gaga in Valentino at the 2019 Venice Film Festival, where it’s iconic because it’s so incredibly special.”

Vanessa Friedman, fashion director and chief fashion critic for the New York Times, says: “For me, the most effective red carpet looks are not just aesthetically successful—elegant, beautiful, flattering—but reflect a moment of social or cultural change. It’s the combination of style and substance that makes them memorable.”

The fact that we still talk about some of these looks months, even years later speaks to the power of a red-carpet moment. “I do think there’s something to this idea that you can have a couple of really terrific profiles written about you, but a singular image can really speak volumes,” says The Washington Post’s Robin Givhan. “It’s something that can be conveyed over and over and over to a public that may not sit down to read a full interview. It’s a shorthand that says, ‘I’m important.’”

We asked people in the fashion industry—from critics and editors to stylists—to share what they believed to be the most memorable red-carpet fashion from 2010 to today. From Porter to Lady Gaga to Rihanna, see who made an impression. 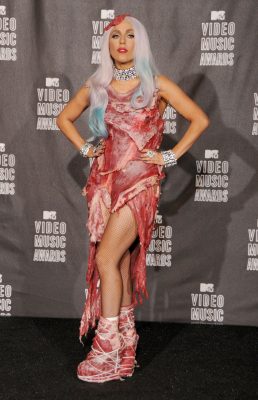 Lady Gaga at the 2010 MTV VMAs
“Because there is simply no way to top that. Because it has become a synonym for disruption on the red carpet. Because it was, as she later sang with Tony Bennett, ‘Unforgettable.’”—Vanessa Friedman, fashion director and chief fashion critic at the New York Times