Ukraine in talks with Uefa to reverse Euro 2020 shirt decision

Ukraine’s football association said on Thursday it was in talks with Uefa to reverse a decision by the European football governing body to remove a slogan from Ukraine shirts after protests from Russia.

“Ukraine’s football association is in talks with Uefa to keep in place the slogan on its jerseys,” the association’s press service told AFP, after Uefa said the message “Glory to the heroes”, stitched on the inside of the shirt collar, was “clearly political in nature”. The association said that “earlier Uefa had approved the new kit and every element of it, including the slogan”.

However, Uefa on Thursday said that the message, which was used by protesters who ousted the Kremlin-backed president, Viktor Yanukovych, during the Maidan demonstrations in 2013-14, was “clearly political in nature”.The decision came after Russia had sent a letter of complaint to Uefa over the shirt, which also features an outline of Ukraine including Crimea, annexed by Russia in 2014, on the front.

Uefa said the map would not need to be changed because a UN general assembly resolution “recognises the territorial borders as broadly depicted by the design”. The slogan “Glory to Ukraine”, which is on the back of the jersey, was also approved by Uefa as “on its own [it] may be considered as a generic and non-political phrase of general national significance”. 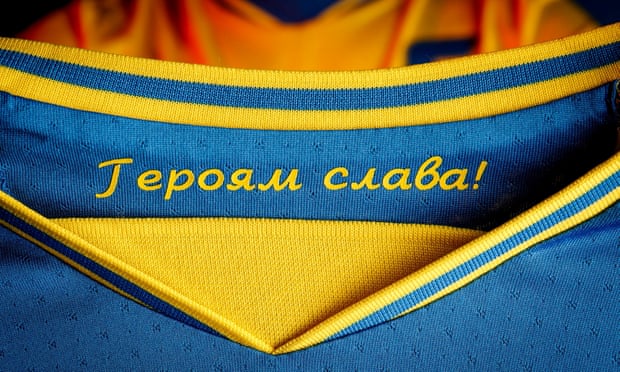