Over the last 20 years there has been an odd ebb and flow in the quality level found in the various titles of the Fast & Furious series. The first movie is essentially a Point Break rip-off with street racing, and it was followed by a terrible part two, but then things took a surprising turn for the exciting and flashy with Fast & Furious: Tokyo Drift. The third sequel, Fast & Furious, proved to be a step in the wrong direction, but then the franchise truly took off, with Fast Five, Fast & Furious 6, and Furious 7 successfully retooling the brand and transforming it into an amazing blockbuster powerhouse. Sadly, however, that amazing run was brought to an abrupt end in 2017 by The Fate Of The Furious, which is too excessively dumb and messy to be any fun.

This now brings us to F9. Justin Lin, having stepped away from the last two chapters in the series after directing three of the four best sequels, is back in the director’s chair, and that fact alone has given fans hope that the movie would return the quality level of the series to its previously established high water mark. Unfortunately, that has not proven to be the case. While there is still plenty of crazy action that is easy to appreciate, lame and lazy plotting wind up taking a serious toll on the entertainment value, and it becomes actively hard to care about anything because the concept of “stakes” gets thrown out the window. It’s far from a nadir for the brand, but sits comfortably in the bottom five when ranking the films.

Not helping anything is that a good portion of the plot, scripted by Daniel Casey, feels cribbed from Furious 7 with some slight alterations. Once again we find our lead characters out of action and trying to live semi-normal lives, with Dom (Vin Diesel) and Letty (Michelle Rodriguez) staying off the grid while they raise their son, but that peace is interrupted when Roman (Tyrese Gibson), Tej (Chris “Ludacris” Bridges), and Ramsey (Nathalie Emmanuel) arrive to pull them back into the spy game. After receiving a mysterious distress message from Mr. Nobody (Kurt Russell), the team discovers that there is another bland, technology-based MacGuffin floating out in the world that they have to make sure stays out of the wrong hands (while Furious 7’s God’s Eye allows anyone to be tracked, this new thing, dubbed Project Ares, can bluntly just take control of anything with computer code).

Of course, the reason why it has to be Dom and his crew who get involved is because the situation is personal, as said wrong hands in this particular case happen to belong to Jakob Toretto (John Cena), Dom’s estranged brother. As illustrated through intermittent flashbacks that break up F9’s action, the siblings had a falling out in the aftermath of their father’s death when they were teenagers, but over the years both wound up taking paths to becoming international superspies. Jakob is eternally resentful and jealous of Dom, and this also apparently puts him in a mind space for giving world domination a whirl. 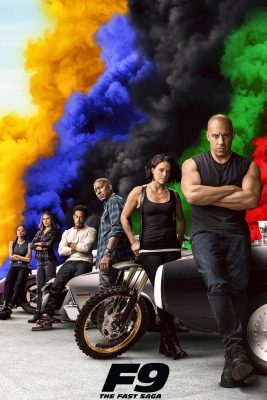 Story has never been a strong suit of the Fast & Furious franchise, but F9 still manages to feel undercooked.
It’s rarely a good sign when a franchise needs to go the route of digging up mysterious/long-lost relatives as tired plot devices (Jason Bourne, Austin Powers: Goldmember, and Star Wars: The Rise Of Skywalker are three titles that immediately spring to mind), and F9 is a film that does nothing to improve that cinematic legacy. What’s more, it actually seems like a joke when you consider the ridiculous emphasis that all of the movies have put on the concept of “family” over the years (how is it possible that neither Dom nor Jordana Brewster’s Mia ever brought up that there is another Toretto brother?). It smacks of being the first idea that someone came up with that nobody tried to improve on because it was perceived as an easy shortcut to advance themes we’ve seen throughout the series – and adding insult to injury it also winds up being a disappointing use of John Cena, who has to put a lid on all of his charisma so that he can seem like a relative of Vin Diesel’s.

The introduction of Jakob isn’t F9’s only character-centric issue, however, as sloppiness in the writing is something that winds up infecting much of the ensemble beyond the core six characters. One of the best developing aspects of this franchise has been its ability to constantly expand its roster of stars, but almost all of the attempts made here to rope familiar faces into the plot are thin. This is particularly true when it comes to Helen Mirren’s Magdalene “Queenie” Shaw (who gets one (1) exposition and one (1) car chase) and Charlize Theron’s Cipher (who spends 90% of her screen time making snappy comments while trapped in a plastic box), but sadly it also extends to the reintroduction of Sung Kang’s Han Lue, who is provided an explanation for how he’s not dead that can only be described as comically convoluted.

There are plenty of eye-popping and creative action sequences in F9 that fans will dig.
While F9 struggles to keep its narrative flowing, the bread-and-butter material is still on-point, as the action scenes are hard to watch without a smile and an appreciation for the absurdity. Save for one sequence late in the film that I won’t go into details about for spoiler reasons, the movie isn’t quite able to hit some of the extreme highs of past sequels – such as the safe drag in Fast Five, the highway tank chase in Fast And Furious 6, and the skyscraper jump in Furious 7 – but there is plenty of fun to be had. Not a whole lot of it makes any considerations for the laws of physics, but it’s pretty damn enjoyable to watch a car swing around on a cable off of a cliff and see powerful magnets flipping vehicles left and right.

F9 hits an inflection point where it becomes really hard to care about the characters.
All that being said, there should be a hard line drawn between “fun” and “exciting” when discussing F9’s biggest sequences, because the movie also exposes a tough franchise problem: there are no longer any stakes left in the Fast And Furious universe. There’s a running gag in the film that sees Roman questioning the nature of his existence and whether or not it’s possible he is invincible – and while it has the cadence of the joke, it also feels like subconscious recognition of a sizable issue. To use an example from the movie, there’s nothing thrilling about watching a car chase through a minefield when magically only the vehicles being driven by the bad guys are getting decimated, and the heroes experience zero injuries or mechanical failures.

It’s not just an action problem, as it is something that weighs heavily on the substance of the plot too. Bringing Han back to life works as pure fan service, but it also undercuts the emotional impact of his passing (albeit the whole point of the #JusticeForHan campaign was that there really wasn’t much emotional impact to be found in the last two movies anyway). Furthermore, it’s really hard to take Jakob seriously as a villain thanks to the combination of flashbacks clearly readjusting the context of his relationship with Dom, and the franchise’s history introducing big action stars as antagonists (ex. Dwayne Johnson and Jason Statham) and then ultimately realigning them for the future.

There are going to be plenty of people, specifically the die-hards, who love F9 unconditionally like they do with all of the entries in the series – but the more discerning fans not willing to throw around free passes aren’t going to find the same kind of satisfying experience. It’s been repeatedly demonstrated in the past that there are fun, clever, and thrilling stories to be told in this world with these characters, but there needs to be more to the movies than what’s on screen here. Clearly some key lessons were not taken from The Fate Of The Furious, but we can keep our fingers crossed that the next chapter will be able to right the ship.