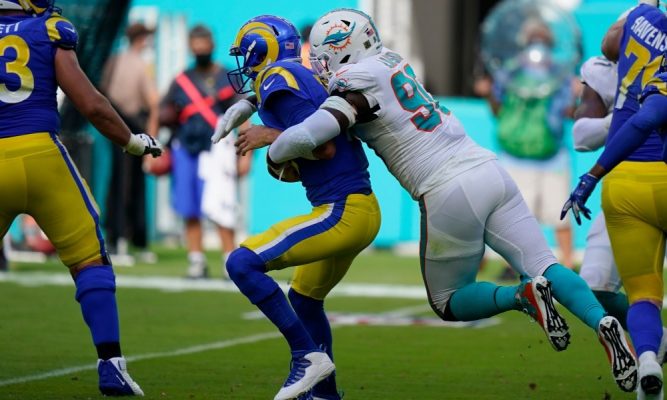 The Los Angeles Rams lost to the Miami Dolphins in week 8 of the NFL season. With all the hype over rookie QB Tua Tagovailoa the Dolphin’s defense posed the biggest issue to the Rams. They had all the answers for the McVay offensive scheme. Bringing a lot of cover zero blitzes and being extremely opportunistic it was a dominant performance. They made QB Jared Goff’s life a nightmare.

The Rams should have gone into the bye week with a 6 – 2 record, but the Dolphins defense had different plans. They will have a couple of weeks now to try to steer the ship in a positive and hopefully consistent second half of the season. With that said let’s delve into whose stock was on the rise and who fell.

Stock Up
S Taylor Rapp
Safety Taylor Rapp had a rough beginning to the year. Being outplayed in camp by rookie Jordan Fuller some started to question if he was in the midst of a sophomore slump. He has answered the call and has done well the past couple of games. This one he had sure tackles and hard hits, one leading to a fumble. He has been in a great position to make plays as well as bringing his high motor.

The defense in general did not do a lot because they were so good that the Dolphins had a lot of three and outs. Rapp was a big part of this giving good coverage and adding a bit of fire to the team. Jordan Fuller is expected to return after the bye. Having the two play at a high level will put a big smile on defensive coordinator Brandon Staley’s face. He will continue to use creative ways to put them to succeed.

He has shined through every game, with the only blemish being against the Bills that wasn’t really his fault. I see Williams continuing to have a tremendous campaign and will make it tough on any QB to hit his mark. He is one Scary weapon on the Rams secondary that will put a chill in any QBs veins.

The RBs
All three running backs had a good day. Each contributed to the game getting big chunks of yards anytime their number was called. Not only running the ball, but all three contributed to the passing game. Rookie Cam Akers had a catch making three players miss showing elusiveness and decision making.

Darrell Henderson continues to show why he is graded so highly with a burst through the line of scrimmage that is lightning quick. It seems he goes so fast he almost trips himself up. Malcolm Brown showed his toughness as well as his blocking ability.Unfortunately, I had to say RBs and not running game. That is because as good as they were doing throughout the game they all were underutilized especially considering the trouble Jared Goff was having with the pressure. With the bye to work out the scheme, the use of the running game will be more widely implemented.

Stock Down
QB Jared Goff
Jared Goff had a very bad game no questions about it. He was under intense pressure from the zero blitz packages the Dolphins kept sending him. He accounted for all four turnovers in the game, two fumbles, and two INTs. On top of that, he was slightly better than 50% of his throws. Some of the sets didn’t help, especially the empty backfield.

The line was getting a lot of pressure agreed, but he had a major issue with pocket awareness. He either did not feel the blitz or had happy feet when the offensive line gave him time. He gets too jittery when things around him get chaotic. This isn’t something new, in fact, it has been his calling card of criticism throughout his career. It was on prime display today as he showed no comfort at all throwing the ball. A part of pocket awareness is throwing through lanes. His throws were constantly tipped at the line.I have noticed he hasn’t been terribly accurate. There were off-target throws throughout the game. Probably due to the pressure, but he was just off, from the intermediate routes to the long ones, and even the flats. Years past he had been pinpoint accurate with a majority of his passes. These past few games have not been the case.

During the presser, Goff did mention it was a horrible game by him. So he is aware of his mistakes and I do believe he will do his best to correct them. I would like nothing better than to have him go back to stock up for the rest of the year. He is going to have to put the work in and I believe he will.

Play Calling/Adjustments
Sean McVay is a smart man and a great coach. Unfortunately, his intelligence seems to get in the way of calling effective plays. Notably, he tends to stay away from the run even though it is working so well. Understandably, he doesn’t want his