The owners of the Washington Nationals and Washington, DC Mayor Murial Bowser on Sunday denounced the shooting outside Nationals Park that sent players and fans alike scrambling in panic.

In a joint statement, Bowser and Nationals managing principal owner Mark Lerner called the shooting “senseless” and said gunplay anywhere in the capital won’t be tolerated.

“We stand together against senseless acts of gun violence in the city we love,” the brief statement said. “Gun violence — no matter where it occurs in our city — is unacceptable and will not be tolerated.

“The Metropolitan Police Department continues to work closely with Nationals security to ensure the continued safety of residents, fans, workers and all individuals in the area.”

According to police, the shots were fired outside the stadium around 9:30 p.m. during the sixth inning of a game against the San Diego Padres. 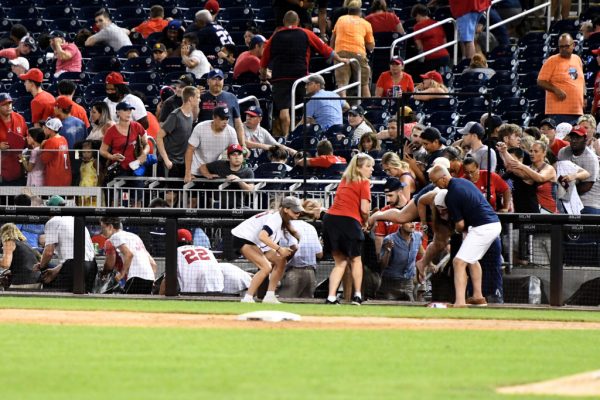 Three people were wounded, including a fan, but all suffered non-life-threatening injuries.

Confusion after the shots were heard sent players to the stands to grab their families — and even fans, who were led into the teams’ clubhouses for safety.

Other spectators ran for the exits in panic.

“While MPD’s investigation is ongoing, it appears the incident involved a dispute between individuals in two vehicles,” the joint statement said. “MPD does not believe the Washington Nationals, the ballpark or fans were the target.”

Also on Sunday, police offered a $10,000 reward for an arrest and conviction of the shooters and released photos of a gray Toyota Corolla linked to the incident.